Specification Projects under the Eclipse Foundation Specification Process MUST produce a Technology Compatibility Kit (TCK) that delivers on the promise of enabling multiple compatible implementations.

It is the role of the TCK to ensure both compatibility of implementations and portability of applications.

Materials for a TCK Release

Specifications are the sole source of truth and considered overruling the TCK in all senses. In the course of implementing a specification and attempting to pass the TCK, implementations may come to the conclusion that one or more tests or assertions do not conform to the specification, and therefore MUST be excluded from the certification requirements.

Who can file a challenge?

Any implementor may submit a challenge to one or more tests in the TCK as it relates to their implementation. Implementor means the entity as a whole in charge of producing the final certified release. Challenges filed MUST represent the consensus of that entity.

The following scenarios are considered in scope for test challenges:

The following scenarios are considered out of scope for test challenges and will be immediately closed if filed:

Challenges MUST be filed via the specification project’s issue tracker using the label challenge and include the following information:

The failure to resolve a Challenge might prevent an implementation from going to market; Challenges SHOULD be given a high priority by the specification project and resolved in a timely manner. Two weeks or less SHOULD be considered the ideal period of time to resolve a challenge. Challenges may go longer as needed, but as a rule SHOULD avoid months.

If consensus cannot be reached by the specification project for a prolonged period of time, the default recommendation is to exclude the tests and address the dispute in a future revision of the specification.

A consensus that a test produces invalid results will result in the exclusion of that test from certification requirements, and an immediate update and release of an official distribution of the TCK including the new exclude list. The associated challenge issue MUST be closed with an accepted label to indicate it has been resolved.

The specification project may approve (user) workarounds for an accepted TCK challenge (as alternative to excluding TCK tests).

When a challenge issue is rejected, it MUST be closed with a label of invalid to indicate it has been rejected. The appeal process for challenges rejected on technical terms is outlined in Escalation Appeal. If, however, an implementer feels the TCK challenge process was not followed, an appeal issue MUST be filed with the specification project’s issue tracker using the label challenge-appeal. A project lead MUST escalate the issue with the Sparkplug Specification Committee via email (sparkplug-spec@eclipse.org). The committee will evaluate the matter purely in terms of due process. If the appeal is accepted, the original TCK challenge issue will be reopened and a label of appealed-challenge added, along with a discussion of the appeal decision, and the challenge-appeal issue will be closed. If the appeal is rejected, the challenge-appeal issue MUST be closed with a label of invalid. 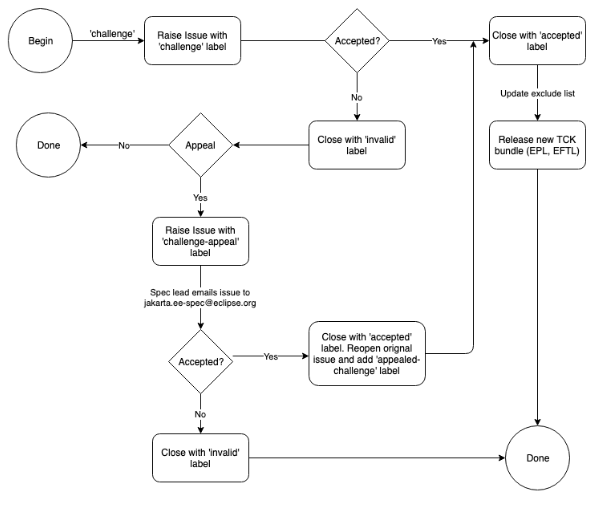 Excludes MUST be included in the TCK project release in a format that is compatible with the testing framework in use so that as the excludes are updated, the affected tests are automatically removed from the test suite.

Excluded tests should be added back in for every major Sparkplug release by emptying the test exclude list for every Specification developed in the respective major release.

Requests for improvement to tests MUST simply be created as issues with a label of enhancement in the specification project’s TCK issue tracker.

Sparkplug is a self-certification ecosystem. If you wish to have your product featured in the official list of compatible products, a listing request as defined in this section is required.

An approved listing request is a statement from the Specification Project that you have met the intended TCK requirements and is just one of the requirements for logo usage.

Requests to be acknowledged as a certified implementation MUST be filed creating an issue in the dedicated repository managed by the specification project and include the following information:

To simplify the process, an issue template is available in the relevant repository.

An optional “Test List Page” showing all tests run may be linked from the Summary Page. The Summary Page URL is the URL that MUST be included in any Certification Requests.

The following are explicitly not requirements:

Implementers may supply this information and provide support for how to run a TCK against their product, but it is not required.

As noted, listing requests do not in themselves grant rights to use the “Sparkplug Compatible” logo. Approval that the TCK requirements have been met is a prerequisite for obtaining logo usage permission. The required approval processes is:

All specification project members are encouraged to review the request and associated supporting materials. Reviewers of a listing request MUST carefully check the validity of all required data, in particular:

Any committer on the specification project may vote against the certification request on the basis that the clearly defined requirements of the TCK process have not been met. This means that if there is a (-1) vote, lazy consensus is no longer an option and a majority vote MUST take place.

Certification requests that are reviewed and found to meet the requirements will be marked accepted by closing an issue with an accepted label. A pointer/link to the issue MUST then be emailed to tck@eclipse.org, as required by the Eclipse Foundation Technology Compatibility Kit License.

If there is a concern that a TCK process issue has not been resolved satisfactorily, the Eclipse Development Process Grievance Handling procedure SHOULD be followed to escalate the resolution. Note that this is not a mechanism to attempt to handle implementation specific issues.

How Tests May be Added to a TCK

The only time tests may be added to a TCK are in a major or minor release. A service release which updates the excluded list MUST not have test additions or updates.

Process for releasing a point of revision of a TCK

The process for releasing a point revision of a TCK entails filing an issue in the sparkplug/specifications repository with the following details:

Back to the top